Horizontal directional drilling (HDD) for installation of cable over a distance of 310 meters beneath the canal. This option eliminated disruption to canal traffic and would also have the least social and environmental impact on the locality during the construction phase and beyond. The contract was awarded to Eco Drill (England) Ltd. 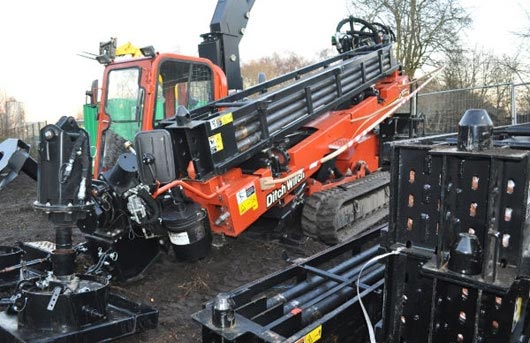 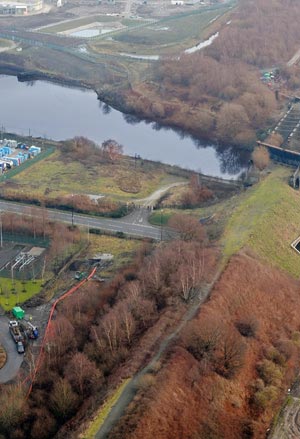 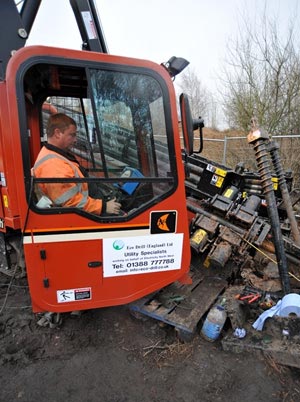 Eco Drill (England) Ltd has been established since 2007 and currently operates eight Ditch Witch Directional Drilling Rigs. So, when it came to understanding the requirement of the canal bore there was ample experience to draw on.As it turned out this experience needed to be brought to bear given that the drilling conditions beneath the canal comprised a mixture of gravels, clays, silts, sandstone bridge foundations and a length of some 220 m of solid and very abrasive sandstone rock that had to be bored through.

Eco Drill decided that the best option to complete the bore successfully given the prevailing conditions was to invest in a new Ditch Witch JT100 Directional Drilling System, purchased from Ditch Witch UK. The rock conditions that would be encountered also required the use of a TCI Rock Drill Bit during the drilling of the pilot bore. The Ditch Witch JT100 rig is claimed to be one of the most advanced HDD systems in the industry. It is extremely powerful and highly productive with state of the art electronic and hydraulic systems, an automated pipe loader. The unit also boasts drill pipe assisted make-up which controls the rotation and thrust/pullback speeds during the make-up and break-out of tool joints which is designed to increase the operating life of drill pipe. The unit also offers an industry exclusive dual pivot drill frame and an on board crane and much more.

After careful planning of how the bore should be completed, which included taking ground investigation boreholes to depths of 35 m and chemical analysis to check for contaminated soils along the bore route, work started with the drilling of a 6 in (150 mm) diameter pilot bore which was completed using a TCI Rock Drill Bit. The pilot bore was required to reach depths of up to 30 m during the 310 m long bore.
Once the pilot bore was completed, the first backream was completed using a 14 in (355 mm) diameter TCI Hole Opener Reamer. A second and final backream was then completed with a 20 in (508 mm) diameter TCI Hole Opener Reamer. Due to the difficult ground conditions it was decided that once the finished bore size had been achieved the bore would need to be swabbed clean and the product ducts, which would act as the carrier duct for the HV cable, would be immediately installed to avoid any further complications. So, this part of the bore operation was all completed in one working day. The cable ducts used for the installation included 1 x 225 mm diameter and 2 x 125 mm diameter PE Duct Coils that were welded to the required bore length using butt fusing equipment and proven on site by Eco Drill.

The varying ground conditions across the bore route at first gave little cause for concern. However, during the back reaming process with around 250 m of drill pipe in the bore, the ground conditions changed for the worse where gravel and silts were encountered and there was a loss of drilling fluid returns. The drilling fluid mixture was adjusted to suite the changing conditions and this issue was rapidly overcome. Unfortunately it was not only the changing drilling conditions that caused difficulties on the project. The weather conditions over the two weeks taken to complete the installation also played its part with some extremely difficult weather conditions including sleet and snow with temperatures as low as -10 Celsius. This meant careful handling was required for the drilling fluids and the lubrication and cooling fluids on the drilling rig to ensure that they did not freeze.

Ultimately, Eco Drill’s investment in the new Ditch Witch JT100 specifically for this project really paid dividends. During the course of the project the machine easily dealt with varying and difficult boring conditions, ensuring the job was successfully completed on time with work from the start of the pilot bore to the installation of the ducts being achieved within a 2-week period.
Since completing the Manchester Ship Canal Project Eco Drill has successfully completed a number of impressive Directional Drilling Projects using the Ditch Witch JT100 including:

Commenting on the project for Eco Drill Mick Angus, Director said: “It was a big decision for us to invest in the Ditch Witch JT100.” He added: “Ditch Witch UK has not let me down in over 20 years of doing business, and I am glad to say that once again we have made the right choice in purchasing Ditch Witch Equipment. The JT100 now gives us the opportunity to carry out larger projects and expand as a company.”

Follow us on your favourite social media services for all the latest Eco Drill news and information!